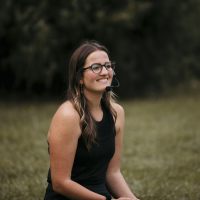 So I have a client (and many more) that have expressed having days where they just don't feel good. They looking the mirror and think "ugh, I feel so big/bloated/gross!"

We all have these days/thoughts. I want to help you all with a great way to correct the direction of our minds thoughts... Because that is just it. What we think isn't always the TRUTH. Inside, if we are aware and hear the thought -- we can create a space between ourselves and that thought. Realizing that basically our mind is tricking us and being #rude.

Become an observer of your mind. We can't believe everything we think!

Here is the exercise for you all and if you would be so brave to share below in the comments:

1) Think about the last thing you said about your body (either quietly to yourself or out loud to someone). For some of us this might actually be hard because we are used to automatically criticizing ourselves... but take a moment to slow down and become aware of what you last said to yourself.

2) How can you change that wording to something more loving?

Because you deserve to be spoken to kindly.

We would never say the negative self talk we say to ourselves to a friend or someone we really love.

3) I challenge you to write down 5 reasons you love your body... and think about how it functions versus the aesthetics. :) Again, share below if you are willing.

4) Lastly, if you have your own tips/tricks for dealing with body image share that as well.

@Bella Diaz I know you love this topic. Please chime in.

@Sawyer Forum I know you have some awesome resources regarding this topic as well :)

Sending love to you all.